Char Dham Tour Packages – Considered Auspicious for everyone, Char Dham Yatra is a must once in life travelling experience. Bharat Buss offers you and your loves ones with affordable yet luxury char Dham tour packages for group, family, couple to solo trips. We have luxury cars, tempo travellers, bus and Volvo available to accommodate your requirement. Two packages are available with us – Badrinath, Dwaraka, Puri, Rameswaram Tour and Chota Char Dham – Yamunotri, Gangotri, Kedarnath, and Badrinath. The pilgrimage tour package cost includes benefits like comfortable seating, clean travellers, trained and experienced drivers etc. 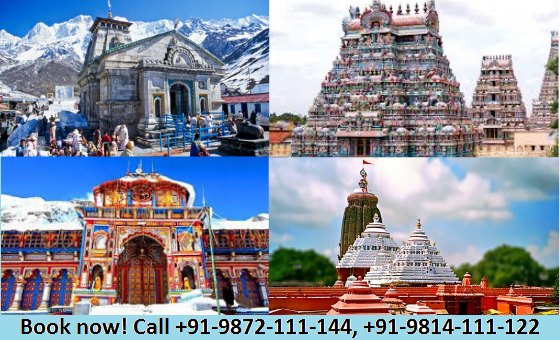 The first Dham is Badrinath, which means Lord of Berry Forest. It is situated in the Garhwal hills of Uttarakhand on the banks of the Alaknanda River. It is said that avatar of Vishnu, Nar-Narayan did Tapasya under the berry tree who herself was Mata Lakshmi to protect him against rain and heat.

NOTE: Badrinath Dham is Open only During April to October each year

Second place is situated at the tip of Tamil Nadu in the Gulf of Mannar. Rameswaram means Rama’s Lord. It is said that Lord Rama built Shiva-Lingam and worshipped Lord Shiva here. The depiction of this place is in Ramayana when Goddess Sita was abducted by Ravana. A bridge was built here called Rama Setu to travel Sri Lanka to Rescue Goddess Sita. Those going for Benaras pilgrimage, it is incomplete without travelling to Rameswaram. The packages include a visit to the following locations:

The Third Place is in West Gujarat where Gomti River merges into the Arabian Sea. Dwarka means, Door or Gate, has got its name from Dwapara Yuga. It is the place where Lord Krishna made his residence, Dwarka instead of his birthplace Mathura.

The fourth pilgrimage centre is Puri which is located on the coast of Bay of Bengal in the eastern Indian state, Odisha (Orissa). Almost 1000 years old, the place serves has a significance of Lord Vishnu (or Krishna ‘avatar for Kali-yuga, worshipped as Lord Jagannath. The Jagannath Temple is the only shrine where Lord Krishna’s Sister, Goddess Subhadra is worshipped along with her brothers Lord Jagannath and Lord Balabhadra. The Package will include visits to the following places in Puri Dham:

Why Bharat Bus for Best Chandigarh To Chardham Yatra?